I've never been to New York before, and the only part of this side of the United States I've been in is Virginia and Florida. Yesterday, I stepped foot in JFK and experienced my first taxi ride in NY. My friend Miriam moved out here after college and I decided to visit her this weekend, which ended up being the same weekend as Halloween. Perfect to see the Halloween Parade down 6th Avenue! But more about that later.

This morning was Miriam's brother's birthday brunch / her niece's baby shower / Halloween party where her brother and sister-in-law cooked up an amazing meal. There was pulled pork and warm apple sauce and pumpkin biscuits and apple slaw and mushroom-asparagus frittata and mashed sweet potatoes and mmm it was good. After the brunch we planned our trip into Manhattan.

Start: Take the Path from Grove St to the WTC stop. After walking in the wrong direction at first, we made it to what we thought was going to be Seaport Yarn. Which it still was (we saw the sign) but was closed on Sundays. So instead we headed towards SoHo.

Stop 1: Easy Spirit. Miriam was looking for some comfortable shoes to replace her old wedges and found the perfect pair.

Cute, right? And they were having a special where you could buy two pairs and get 20% off your purchase. So, of course, I had to buy a pair of my own cute shoes.


The best part is that they are water repellant. Win! And now I have a pair of ankle(ish) boots.

Stop 1.5: Starbucks. But not for the coffee, for the restroom.

Stop 2: Purl SoHo. Which was open, thank goodness. One of the cutest yarn stores I've ever been to, and they have fabric, too. 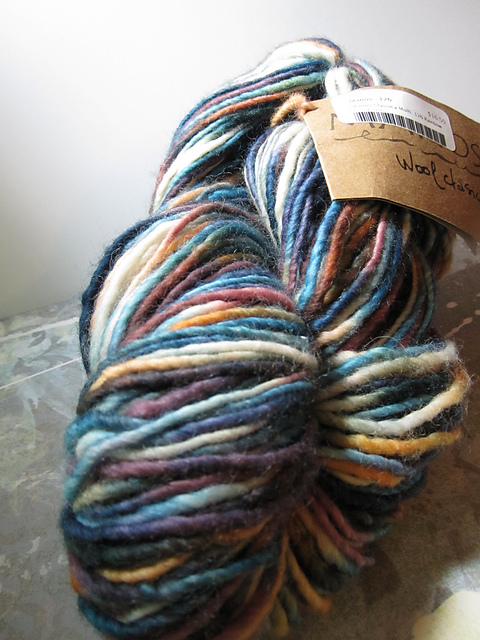 I got some yarn for me, and some yarn to make Miriam and her neice matching(ish) hats. I also got an adorable embroidery kit. Onward!

Stop 3: Kate's Paperie. I got some great stuff here. They had a pack of random pretty papers that I can use to make more magnets (excited!) and I also got a set of alphabet stamps. Their Halloween stuff was on sale, so I bought some sparkly, black, gothic letters and a mask (to be decorated). Such a cute store.

Stop 4: Think Coffee. On the way to the Village we stopped by this coffee place in NoHo. We both had the Spanish Latte which was delicious at the bottom (the condensed milk piled up a bit, yummy). 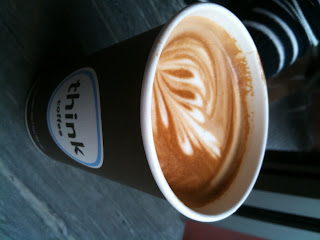 From there we headed up to Washington Square Park.

Stop 5: Washington Square Park. We saw the arc. That's about it.

Stop 6: 6th street and the Halloween Parade. We walked around for a bit and eventually found a spot on 6th street to watch the Parade. We didn't get to see the meat of the parade until about 7:30 (started at 7 pm). There were some neat puppets and some semi-enthusiastic Thriller dancers. There were also some French people that were standing way too close behind us. I like my personal space...But otherwise the parade was enjoyable.

Around 8 we headed back to the Path and back to Jersey City. All in all a very fun day. Tomorrow is going to be an early start heading to Times Square and Central Park. More yarn stores and coffee shops and other cute places to visit. Yay!
Posted by Elisha at 7:34 PM 0 comments

More knitted graffiti! I was on my way to Starbucks and passed by this Giants-themed street light cozy. How appropriate for San Francisco. 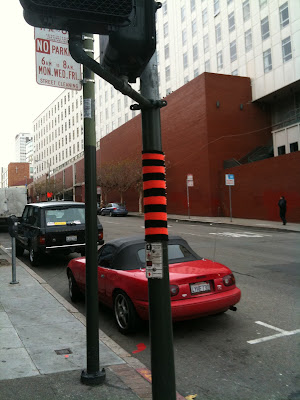 I did a lot of crafty things this weekend (by a lot, I mean two three!) and as soon as I take pictures I will post them up here. On Saturday, Garnet and I made magnets, thanks to the tutorial by not martha. It took forever to find the items we needed at Michael's, because our Michael's in Emeryville just has to be different and organized all funny. Once we found the glue (between the kid's and the paint section), the magnets (in the kid's section), and the circle punches (hidden in the scrapbooking area), we were ready to go to Tap Plastics to get our cabochons (best name for a plastic shape ever). We got a whole bunch of 3/4" ones for $0.45 each. Next time, we're going to buy them online in bulk, because they were so easy to make, we want more!

Yesterday I made a laptop case from my Home Ec class. I love it so much. The fabric is so pretty and it fits my laptop like a glove (it's amazing what accurate measurements can do). I can't wait to use it!

Update: I lied, I did three crafty things this weekend. The third thing I did was cast on for a new sweater for my dad. The old one has been a work in progress for at least 3 years, and although I was almost done, the second sleeve was about 2/3 the size of the first. So I decided to start over with a different pattern. We'll see if I can get it done it time for Christmas this year.
Posted by Elisha at 10:52 AM 0 comments

Guess what? I moved again (which would explain the absence of crafty posts; not very possible when all my stuff is packed up). That's right, after staying in my old new place for less than 5 months, I pick up and leave. Originally I was going to be there through December. Well, originally originally, I was going to be there through May of next year, but after the whole roommate debacle, the lease was changed to December. And then I found out my apartment wanted to kill me, or at least render me useless to the outside world. Something on/in the property was giving me a stuffy nose and a sore throat. I know that doesn't sound that bad, but when you have it every day, and the sore throat gets so bad that it's painful to breathe, let alone swallow, it's no fun. At first I thought it was a cold, or some extension of the Strep I had. But then it just kept going...and I would feel better after I went outside and away from the apartment. So we determined that I had to leave this apartment at once (this was on September 27) and in order to avoid paying another month's rent, I had to move out by October 2. And I didn't have a place to move to yet. Lucky for me, I found a place the day of, and signed the lease a day after. That has to be a record of some sort.

Packing everything up was no fun. I have way too much stuff, because I'm definitely a hoarder. I'm reminded of a post by Allie over at Hyperbole and a Half which I cannot seem to find. I know it was there because of this:
But I can't find it when I actually click on the link...

Anyway....thanks to everyone that helped me move. That would have been difficult (understatement) to do on my own. I had about 5 people help over two days, all of them much stronger than me, thankfully. No one helped me unpack, though, which is a good thing, since I'm very particular about where my things go. But finally, after about a week of unpacking, I'm pretty much done. There are some things I still need to hang up, or put somewhere else, but for the most part, I'm done. *phew*
Posted by Elisha at 10:49 AM 0 comments