So far, I love the class. It's technically over but I'm only about a third of the way through the projects. Luckily for me, they plan on keeping the blog up for a year, and the instructors will be around for an extra month to answer questions. Having written instructions is of course different than going in to a studio and taking a physical class, but I think the girls over at Home Ec did a great job laying out step by step instructions and pictures. I can mostly follow everything (the hardest time I had was with the hemming the jeans...go figure). So let's look at some projects! The first project had two different techniques to make napkins.

I like polka-dots...Surprisingly, the ric-rac one was easier to sew than the zig-zag one. I have a whole bunch of fat quarters so I might be making more of these in the future.

The next project was a drawstring bag. 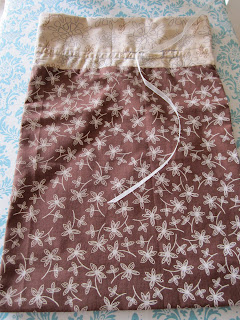 My sewing was kind of iffy here. I completely changed the dimensions of the bag because I thought something smaller would work fine and I wanted to use up some fat quarters.

Project three was a market/tote bag. This is one of my favorites. I love the fabric and I was so proud of my sewing. 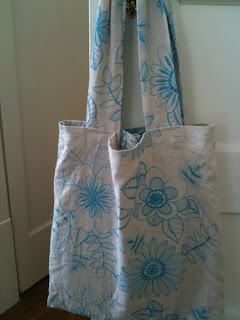 At first I had sewn the straps on wrong, like two different straps on one side....silly me. But that was easily fixed with a seam ripper and some patience. I've used this bag so much already. And I still have more of the pretty fabric!

I skipped the fourth project (bunting) because it uses different colored smaller fabrics. I figure I would wait until the end to see what I would have leftover. So the next project I completed was a supplies roll-up. This project took a lot longer and my tension was off in my bobbin so the stitches are all messed up in the lining. I was a little lazy and didn't want to redo it, so I just left it as is. I don't plan on giving this to anyone anyway...The fabric pattern is kind of fun, though, right? The project actually called for an oilcloth outside, but I had this zebra print on hand already, and it was thicker than your average cotton, so I used it instead. I also made the roll-up bigger than called for because I wanted to use it for knitting needles.

The next project I completed was an ironing board cover. This was so simple! And so quick! I bought this lovely fabric from Joann and I ended up having a lot leftover (even with cutting way too much fabric out), so that's exciting. I needed the ironing clips badly because of all the extra fabric. Surprisingly the elastic was pretty easy to sew on. And "finishing" the edges with a zig-zag stitch wasn't too bad either, although it gives it a more rugged look.

I'm working on pot holders right now, which are much needed. I only have one which doubles as an oven mitt. All I have left to do is finish the seam and find matching thread to quilt them. And instead of making one, I made 4, because there was enough fabric in the fat quarters to do that...I love fat quarters.
Posted by Elisha at 10:44 AM 0 comments

Look what I saw today on the street: 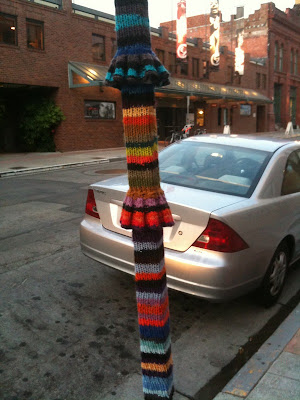 Knitted graffiti! This is the second one that's popped up in Berkeley that I've seen. The last one I didn't get a chance to take a picture, but that's okay because this one has little ruffles! I love seeing knitting out on the street; it's so exciting. I feel like it's seeing someone else knitting in public - you know you're not the only one who shares your crazy obsession with yarn...
Posted by Elisha at 9:34 PM 0 comments


Hi. I'm here. Still breathing and the like. Sorry about that one-month (30 days exactly!) hiatus. Besides my computer being out of service for a few days, I got sick. Like, a lot. First I got strep throat. That was okay because I had it before and I knew I just needed rest to get better. So I got rest. But then I went back to work too soon and relapsed-ish. I didn't have strep anymore but I was sick again. And tired. So I worked a little less but kept chugging on because I had to go to San Diego that weekend and I can't not work if I'm going to go to San Diego. So I went to SD for a weekend and spent all the first day on my feet, in the sun, at Legoland. Granted, it was a lot of fun, but probably not the best idea. The next day I spent on my feet as well, but more relaxed as I toured a bit of San Diego with one of my UCLA friends. All of this while I'm still sick, with a terrible sore throat. So I come back and go to work on Tuesday, another bad idea, and end up needed the rest of the week off because guess what, I had an ear infection. FAIL. So then I tried to recover from that, got some antibiotics (that wanted to rip apart my stomach into tiny pieces), which cleared up the ear but I was still congested with a sore throat. That wouldn't go away. For daaaays (with 4 a's!). Then my ear felt blocked again...So I went back to the doctor and she said, "It's either an infection that I'm not catching, or allergies." She gave me more antibiotics (ones that didn't want to kill me from the inside) and some allergy medicine. That did the trick. I'm finally healthy again (it's been a month??) and I can breath through my nose, mostly. I'm thinking I'm allergic to something in my apartment, or my immune system had a temporary failure...Normally my system is a lot stronger than that. I would get sick about once a year maximum. I feel like that's not that much, but maybe it is?

Anyway, even though I was dying sick I did a few crafty things, including my Home Ec course (which is technically done but I'm on like the 5th project or something...). I don't have pictures yet, but I plan on taking some of my pretty napkins, pouch, tote bag and supplies roll-up. And I might make a whole different sweater for my dad....but that's another story.

To wrap things up...